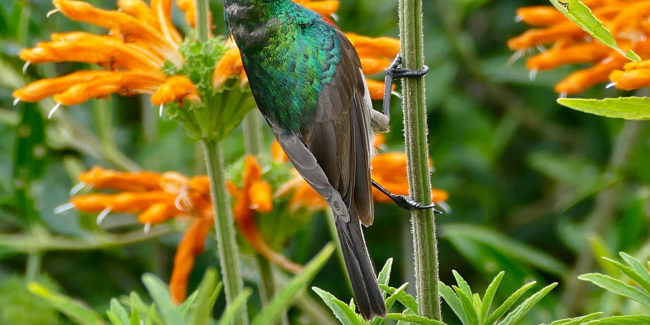 If you look in the garden, even nature, there is smorgasbord of relationships at play – the most important is that of the bee and the array of flowers it pollinates, all connected in the circle of life. The trick as landscapers is not to break the circle but to enhance it.

Agriculture is dependent on certain symbiotic relationships for example bananas, mangos and peach farmers are reliant on bats for pollination of their fruit trees. While citrus farms, are just one of the few fruit and vegetable farms that rely on bees for pollination.

Symbiosis is any type of a close and long-term biological interaction between two different biological organisms, be it mutualistic, commensalistic, or parasitic.

The most common symbiotic relationship in the South African garden,  is that of the garden acraea butterfly and the wild peach. As discussed in out butterfly garden blog, a butterfly garden is more about the leaves and caterpillar, than the flowers and butterfly.

The wild peach has evolved to produce a second flush of leaves, after the Acraea larvae have eaten it bare. While the caterpillar dropping provide fertilizer for the tree.

The Garden Acraea provides food for insect-eating birds like the cuckoos. Interestingly the cuckoo has a parasitic relationship with sunbirds, up next on our list. 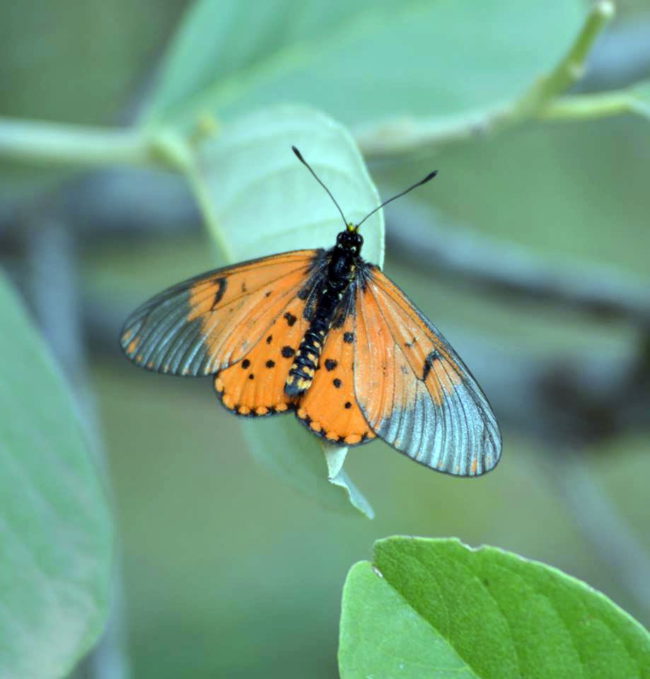 These delightful little birds are the predominate pollinator of the Leonotis leonurus. The curve of a sunbirds beak has evolved perfectly to fit the trumpet-shaped flowers of the wild dagga. The orange variant of Leonotis leonurus is also the most commonly occurring colour because sunbirds are known to be attracted to red and orange rather than white or cream. The Leonotis leonurus  offer nectar to the sunbird in return for pollination. 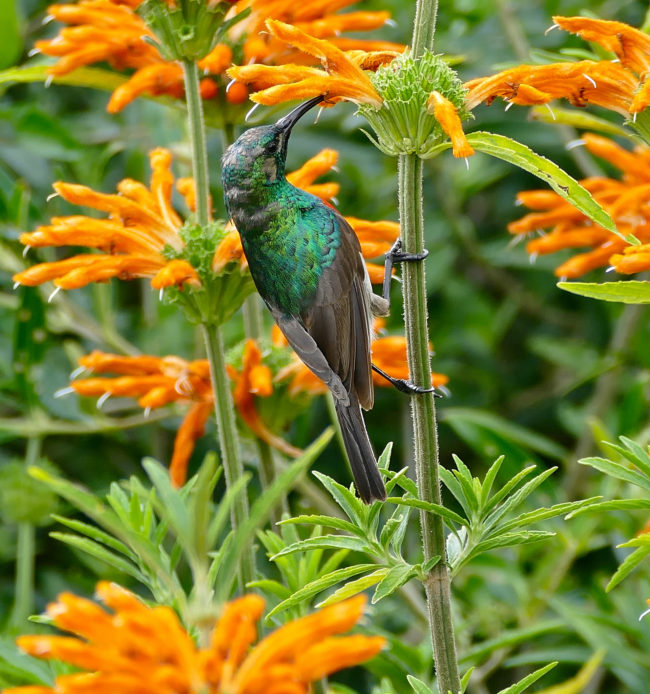 6. The commensalism relationship between the Cape parrot (Poicephalus robustus) and the Outeniqua yellowwood (Afrocarpus falcatus)

Today, less 10% of South Africa’s yellowwoods exist compared to 350 years ago and as a result  there are less than 1 000 Cape parrots in existence. The Cape parrot and the Outeniqua yellowwood both occur in the Afromontane forest found in the mistbelt, between Hogsback (Eastern Cape) and the Karkloof area (KwaZulu Natal).

These quirky birds have evolved behaviorally and the physiologically to almost entirely depend on the yellowwood trees for food and breeding. They are also known to disperse the seeds of the tree. 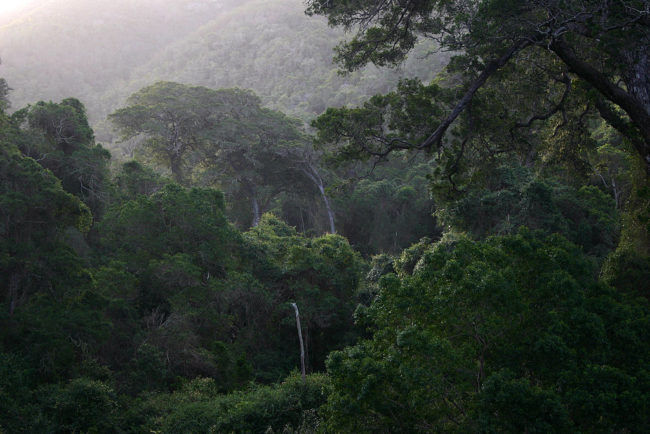 Fig trees play a vital role in tropical for naturescapes and subtropical gardens like Durban because of their year round fruits, that feed bats and frugivorous birds. Birds and bats play a role in seed dispersal; however, the figs have to be pollinated  by the fig wasps first.

Fig trees and fig wasps have a symbiotic relationship known as obligate mutualism – meaning neither lives without the other. The tree relies on the wasp for pollen dispersal and pollination, while the wasp can only reproduce in the florets of a fig fruit.

There are 750 ficus species world-wide and generally each ficus has a species of fig wasp that are specialists in that specifics own pollination , preventing ficus hybridization.  The relationship is not strictly one-to-one (one wasp for one ficus) as there are certain fig wasps that do not play a role in pollination. There are only 300 known fig wasps. 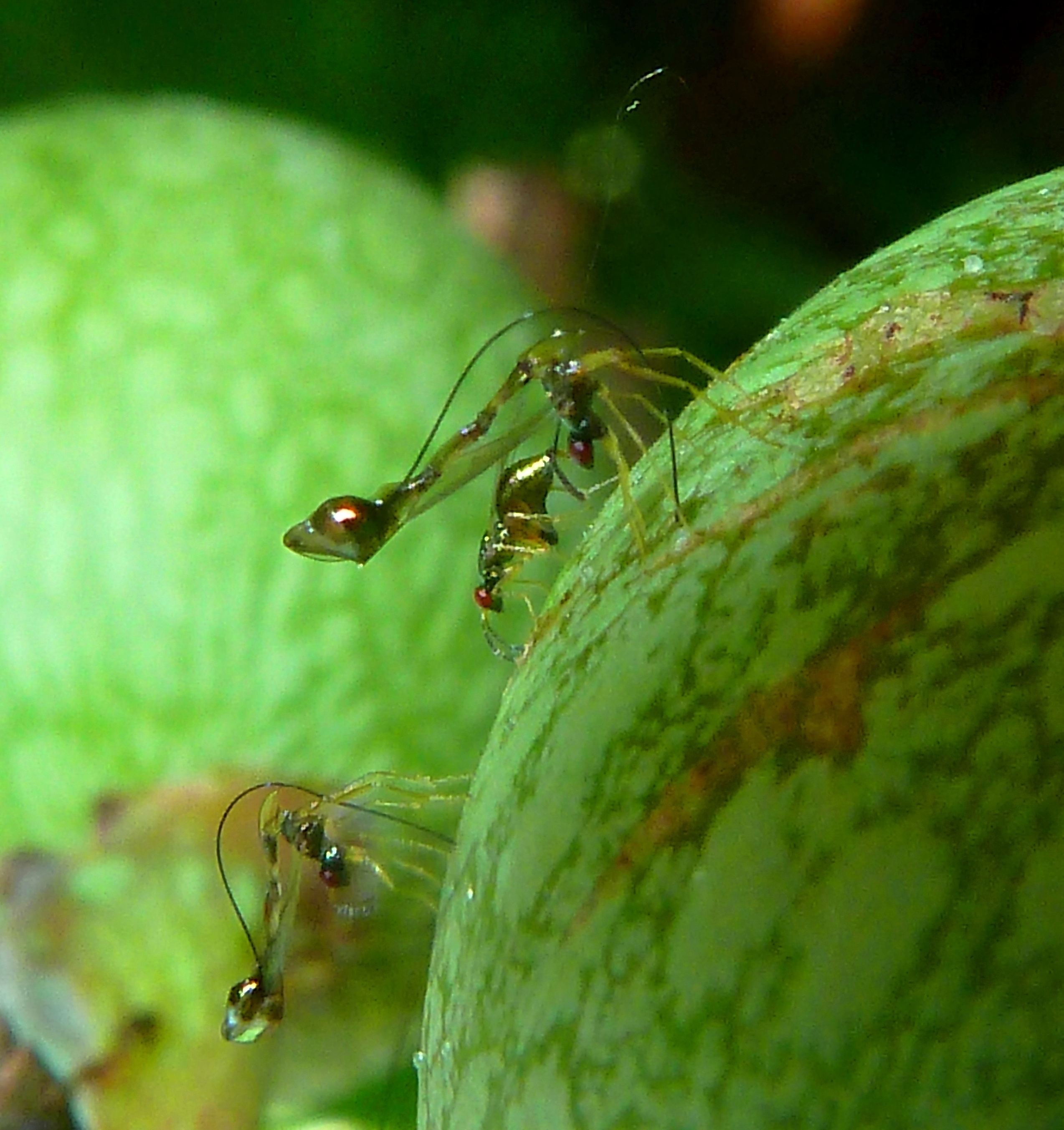 The sugarbird is a fynbos specialist and is endemic to the Cape Floral Kingdom sticking its head into the 300 goblet-shaped protea flowers a day.  In doing so the sugarbird preforms an important function pollinating commercially desired and endangered Protea species.

Like humans, sugarbirds and all birds for that matter, have similar vision so ornithophilous flowerheads tend to be aesthetically pleasing to both species. Whereas , bats and insect would rely more on the flower’s scent than appearance.

The sugarbird has even evolved to have extra-long sharp claws so it is able to grip the protea heads in strong Cape winds. 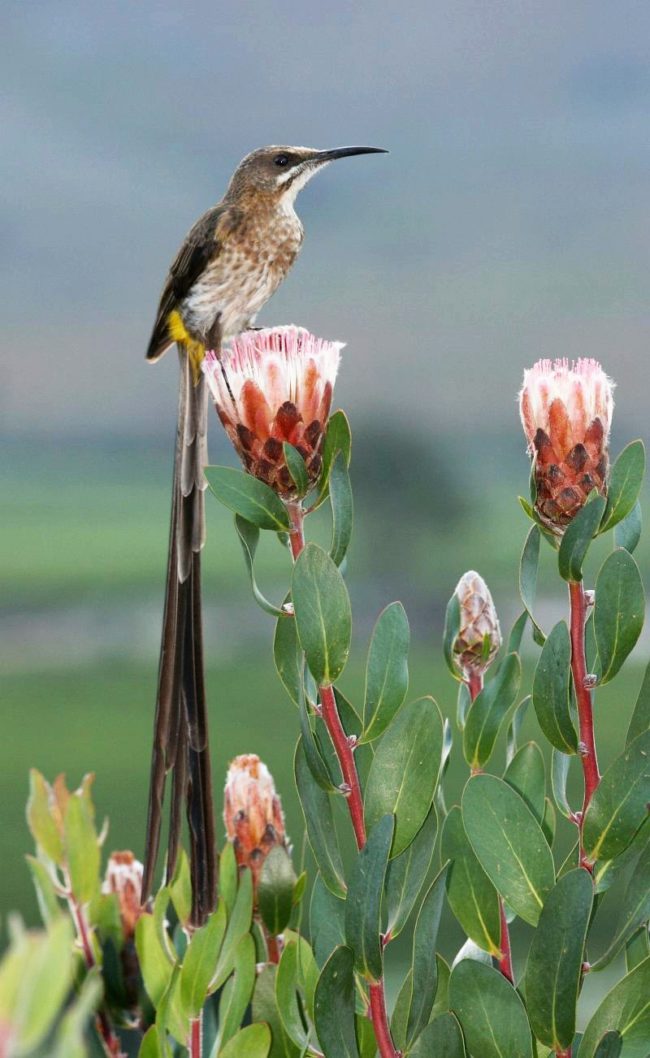 Of baobabs, bats and elephants – a relationship of epic proportions

This is not a garden example of a symbiotic relationship The mighty baobab begins with a fruit bat. The large white nocturnal flowers of the baobab attract large fruit eating bats that act as the baobab’s pollinator. In exchange the baobab provides food and shelter for the bats.

The fruits encasing the fertilised seeds are then eaten by elephants and carried miles away. The gastric juices of the elephant weaken the shell of the seeds necessary for successful germination. The seed is then dumped, encased in its unique blend of potting soil, ripe for growing into the largest tree in the savannah. Both the elephant and baobab are keystone species and play important ecological roles in nature. Although it should be said when the pachyderms meet pachycauls the baobab comes off second best as elephant strip the tree to get water in times of drought. 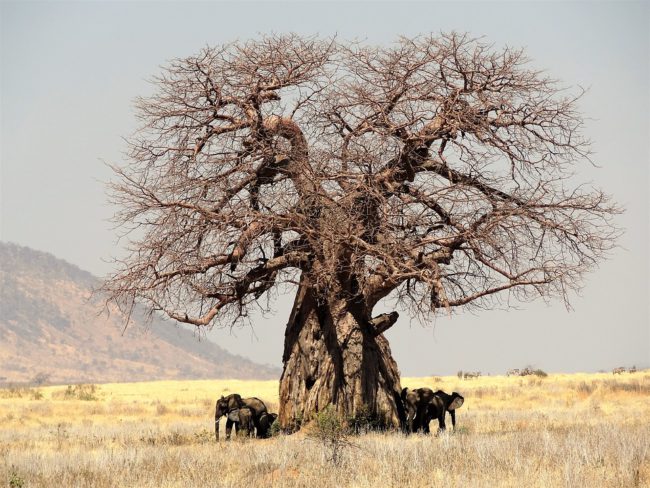